skip to main | skip to sidebar

Finding My (Your) Passion

I am two months in to my sabbatical from work - more commonly known as 'maternity leave'. Lots of time at home prompts many things - an excess of daytime TV, more reading books, and a good amount of thinking and reflection.

A few influential things of varying importance:
-The birth of my own son (of course!). Bringing a human into the world! Incredible!
-The birth of many children from other friends, and the serious illness and/or death of friends or friends' family.
-Other people who are working on their passion.
>I was at the dentist this week and asked my dentist about his recent travels, since he is regularly travelling to other countries to complete dental work. He talked about how it is his real passion.
>My boss of two years at work recently left the company to go back to school to study atmospheric science and work on the environment/artic water cycle.
>I just finished reading Tony Dungy's book. He refers often to his goal in life which is to honor and serve God. Football is a means for him to do this, whether through the public eye providing the means to volunteer and speak for charities he believes in, or how his family is financially able to adopt children.

I don't think I'm dramatically askew from my passions with my current tasks but I am looking into how I can do more towards them.

What inspires you? What are your passions? What do you want to do for the world?
Posted by Kaco at 2:58 PM 1 comment:

I've seen advice on how to cut an onion many times on TV. Somehow, I haven't seen my method, which I think is MUCH easier for those of us who aren't yet professional chefs and faster to prevent those tears.

First, cut off the sprout side of the onion to create a flat surface. It is safer and easier to cut an object with a flat side. (mmm..look at my pretty Global knives) 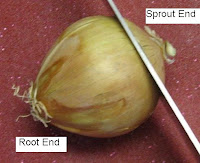 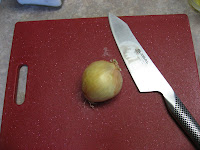 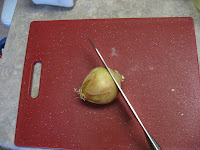 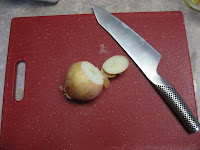 Place the cut side down on the cutting board. Next, cut the onion in half through the root end. 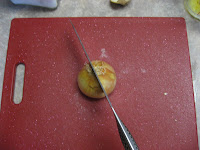 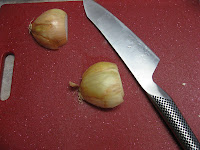 Peel the onion and rinse off as desired and/or if it is dirty. Place cut middle side down. Leave on the root end - this is the main part of this tip. This holds the onion together, which helps for uniformity in chopping. 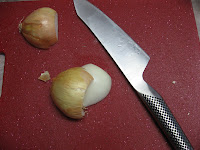 For half-circle slices, simply slice across from the cut edge towards the root end. Leaving the root end attached holds the layers of onion together during slicing. The peel, root, and sprout remnants can now be composted.

This half-circle shape is a good shape to toss with zucchini to saute, or with bell peppers to make fajitas. 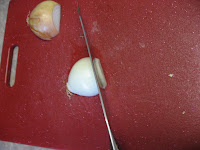 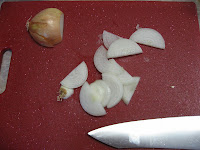 For a diced shape, cut the onion multiple times from sprout end to root, without cutting through the root end. The closer these are to each other, the smaller the dice will be.

Slice across similar to the half-circle technique. 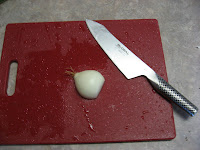 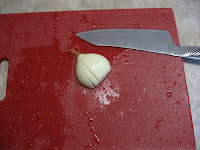 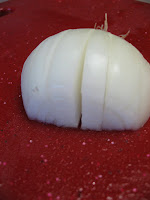 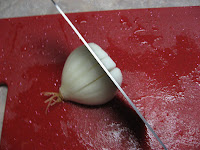 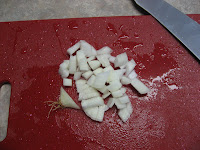 Footnotes:
Refer to Basic Knife Cuts for examples and definitions of cuts and shapes.

Ad lib:
Crying and Onions - So as I got older I realized my eyes became less sensitive to watering when cooking with onions. I eventually figured out that it was because I had contacts which block the absorption of the onion vapors into my eyes! For those of you with better vision, try chilling your onion in the refrigerator or freezer to block some of those enzymes from escaping.

Onion Smell - To get onion smell off skin, rub with stainless steel. It has a reaction with the onion to remove the odor. Try the faucet or a spoon. I may be a chemical engineer but can't fully explain how it works.
Posted by Kaco at 1:35 PM 2 comments: